Reinventing fractions and division as the are used in Algebra: The power of preformal productions 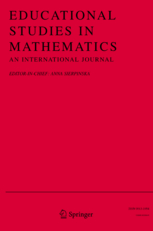 In this paper, Michael Matassa and I explore a problem of practice that we experienced as algebra teachers. Namely, we noticed that students in algebra often struggled with division when the quotient is not an integer (e.g., 7÷9). Furthermore, even though division is always represented as fractions in algebra courses, we noticed that students rarely, if ever, represented quotients as fractions. We therefore set out to explore student thinking around fractions and division. Subsequently, we engaged in a design study—oriented around RME design principles—to guide students to reinvent the relationship between fractions and division.

Our major finding in the study concerned the role of so-called "preformal" mathematical productions. These are:

Mathematical models, tools, and strategies that embody historic activity and social interaction. They are simultaneously general and specific, and as such they exist between students’ informal realities and formal mathematics. Through activity, preformal productions can be made general enough so as to be applicable to a wide variety of problems, but they retain contextual cues to specific situations (Peck & Matassa, 2016, p. 272)

For example, the "bar model" for fractions is a preformal production. So is the "partition, distribute, iterate" strategy for fair sharing. In the figure below from the paper (p. 255), one of the students in our study is using both of these preformal productions to find the equal share when 5 people share 4 sandwiches equally.