NCTM 2016: Modeling your way to understanding with Realistic Mathematics Education

Raymond Johnson and I facilitated a session on RME for high school teachers at NCTM 2016. 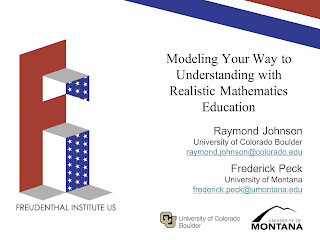 In this session we discussed the unique way that "modeling" is conceptualized in RME (as organizing rather than translating), and we  exemplified the RME approach by engaging participants in an activity sequence that guides students to reinvent formal operations with quadratics and polynomials.

NCTM 2016 research session: The intertwinement of activity and artifacts in Realistic Mathematics Education 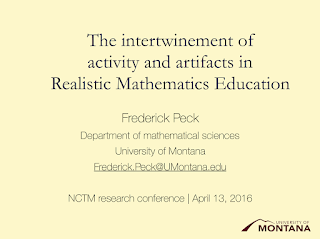 In this talk, I argued for a cultural perspective, in which activity produces artifacts, but also, those artifacts mediate and transform activity. The upshot is that activity and artifacts become intertwined: 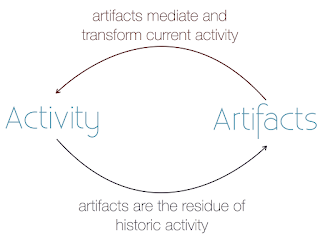 From this perspective, mathematics artifacts are not private mental objects, but rather they are things in the world. They are durable and shared, and they exist across people and time (within a social group). Furthermore, activity is not private mental activity, but rather it is the accomplishment of a system composed of both persons and artifacts.

As I detail in the paper, adopting such a perspective resolves some internal tensions in RME. It also has implications for the activity principle, reality principle, and interaction principle. Finally, it leads to a new principle: the producer principle, which states that people are produced as particular kinds of people as they engage in activity with artifacts: 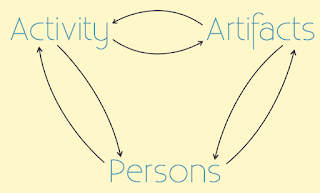 To learn more, you can download the presentation and/or the paper.